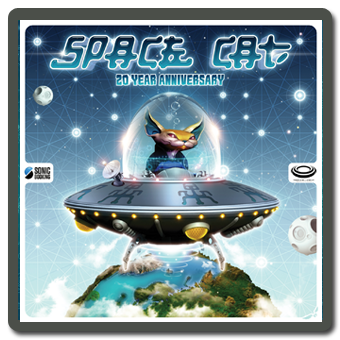 Space Cat is a psytrance veteran of the psychedelic scene having been active for two decades now and with a massive catalogue of music that he has produced, he is able to offer a a special 20 year anniversary album to celebrate his finest moments.

He has also collaborated with Simon Posford, Max Etnica, GMS, Space Tribe, Elysium, Skazi, Pixel, Raja Ram, Joti Siddhu and many others, all adding to a massive discography of released music.

Avi was also part of a small group of musicians who founded the Global Psychedelic Trance Movement.

Trancelucent Records have just released a 20 Year Anniversary album that pays tribute his 20 year legacy as one of Israel’s finest producers and is packed with 9 remixes from big name producers all at the top of their game currently, such as LOUD, Coming Soon, BliSS, Outsider, Avalon, Electric Universe, Audiotec and Lish.)

There is also a special a World Tour being managed by Sonic Bookings.

It's the weekend! ☀Grab your mates, blast the tunes and go dance! 😍🥳 ... See MoreSee Less

Even though we weren’t close, I feel so much pain learning about the sudden passing of this brother king @virgilabloh. My sincere condolences and thoughts goes out to his family and everyone he held close to his heart as well the entire community of people who supported him.