The Scrambles4Money rap battle between Lexx Luthor and Pava Gunz will be taking place this evening, Friday 17th of March in Braamfontein, Joburg. 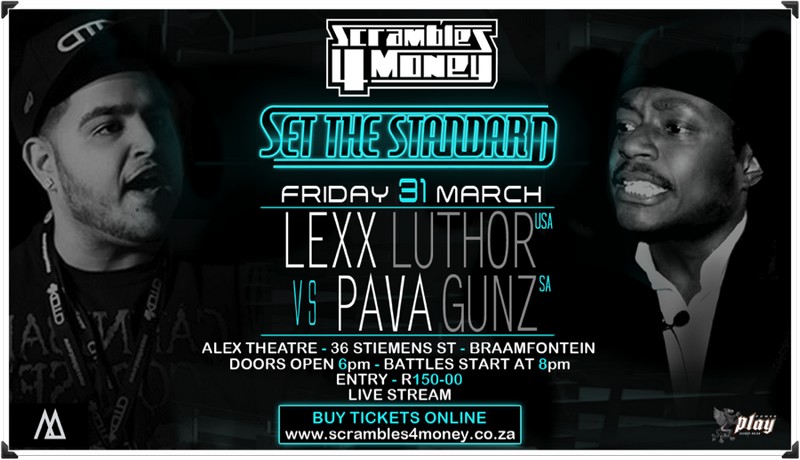 Lexx Luthor is one of the leading rap battlers in the USA.

He will be battling against Pava Gunz here in South Africa. Lexx Luthor is more than a worthy opponent, having paid his dues in his come up in Staten Island, New York. He’s been in the NY Draft League, the KOTD main stage, DON’T FLOP and more high energy and high stress rap battles. He is also the owner of the ‘iBattle’ league.

Scrambles4Money takes the art of the rap battle and gives it the center stage it rightly deserves in African hip hop.

Pava Gunz who is based in Secunda has an “easy-to-catch delivery and is known for his witty and often current content and wordplay”. He is a punchline ready battler who has probably been sharpening these comebacks for weeks ahead of the Scrambles4Money battle this evening.

The battle between the two rappers will be streamed on www.scrambles4money.co.za. Tomorrow, Saturday 1st of April you will get to catch another session of rap battles. These battles will be carried out by the DRAFT LEAGUE’s best going head to head. The DRAFT LEAGUE event will be free to the public at Grayscale Concepts Store.