You are here: Home / News / Rocking the Daisies 2018 chokes on their ‘no personal drinks’ announcement

Rocking the Daisies 2018 chokes on their ‘no personal drinks’ announcement

Rocking the Daisies 2018 probably made their worst PR blunder to date last Friday and, what seems right now, to be a branding nightmare. 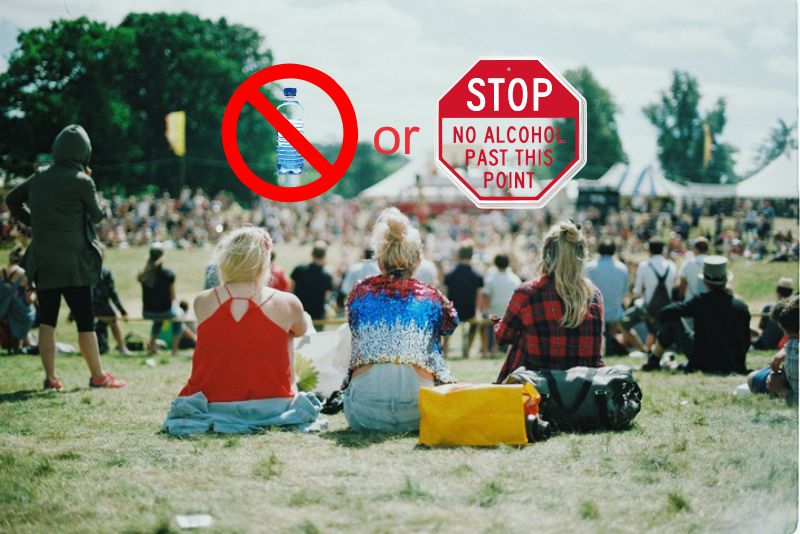 Image is a stock photo of a festival – NOT Rocking the Daisies.

With one month to go, Cape Town’s ‘biggest musical festival’ (as claimed by promoter, George Avakian – see cringeworthy Twitter video at the bottom of this article) made an earth-shattering announcement; revelers are unable to bring ANY liquid into the event.

No alcohol, cool drink, or even life (water) will be allowed to penetrate the RTD fortress from the outside world.

It is their “duty to comply” with their “social and legal responsibility as an entertainment venue” to force attendees to buy drinks, cool drinks and water from the bar.

Granted the price of drinks is affordable, but this point has been sorely missed by ticketholders who are livid.

The point, which MANY attendees have been vocal about on the comment thread for the Facebook announcement, is that it is misrepresentation by the festival.

Quite frankly ticket buyers are PISSED, and not in the festival fun tequila shot way.

Attendees who are looking to refund have also complained online that one can only transfer tickets, not get a refund, although we haven’t found concrete proof of this and surely consumers’ rights would be protected against this?

Some say they are even willing to forfeit the money to stand against what is seen as a travesty by would-be festival goers.

On Ticketpony, at time of writing, there are 465 people trying to sell tickets.

Here is the Rocking the Daisies 2018 post from their page with 600+ angry comments. There are another 200+ comments on the event page too.

As one user pointed out, “You released information that would stop us from buying tickets after we had bought tickets. You realise we can easily take you to court based on this.” [sic]

If one ignores the emotional backlash, the bar prices are actually very reasonable.

Tequila and Jägermeister for R12!

But to ban all soft drinks and water is simply ludicrous.

Someone never thought this through properly and to lead the announcement with the disallowing of liquids and then add a photo of the bar prices, thinking that festival-goers would just suck it up, was very naïve of the event promoters and their PR team.

It should be pointed out though that they have said on Twitter that there will be FREE water stations all over the festival. So if people have issue with water, it seems like a non-issue although there’s no clear indication as to how one can/should transport this water to and from their tents.

The seed of greed

Where did it all go wrong for this once loved festival?

The slope started slipping after they announced separate camping and festival tickets.

With tickets starting at R595 for Phase 1 and increasing to R895 for Phase 3 (festival ONLY) plus having to pay to camp (ranging between R295 and R6,995) you’re looking at a MINIMUM spending of R900 just to get in to the festival.

And don’t let them catch you crashing in your car for a little kip!!!

It’s going to be an interesting month and an even more interesting event; will the Daisies be rocked, or will it be a giant flop?

Whilst we do understand that they target the lowest common denominator to bolster their numbers, it looks like they underestimated their target market… or did they?

Now, for further Rocking the Daisies 2018 cringe, here’s the rather obnoxious video we mentioned earlier of the event director talking about being a ‘game changer.’

UPDATE as at 11 Sept

Rocking the Daisies 2018 have finally responded to the outcry from their customers after Friday’s announcement to not allowing alcohol, cooldrinks or water into the festival.