You are here: Home / News / Reality Decks is a VR DJ app from Oculus Rift

Reality Decks is a VR DJ app from Oculus Rift

Realise your DJ dreams in VR with Reality Decks from Oculus Rift. 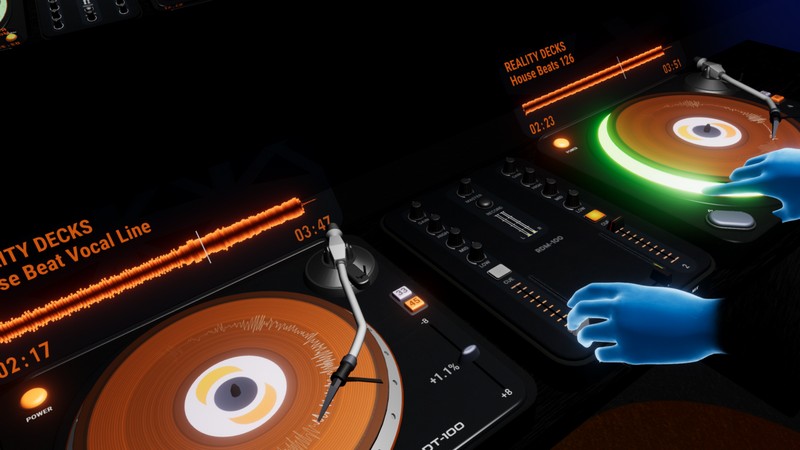 EVERYONE WANTS TO BE A DJ, and now with this VR DJ app you can pretend to be one.

The app was designed and programed by Oculus Rift and is the latest addition to the new world virtual reality DJing.

Their goal isn’t to create a similar experience to the real deal, but to truly mimic the real world feel of DJing with “precision mixing.”

In order to DJ you need A-a person (though some may argue), B-equipment, and C- means to record your sets.

Check it out; Reality Decks has all that covered! Users can create their own avatar, mix on virtual vinyl turntables and record their sets-without needing pricy equipment.

<H4> Virtually everything on the decks is possible

Use your avatar for precision mixing by nudging the vinyl or rubbing the side of the platter-yum!

Included in the app is 10 tracks from “up-and-coming featured artists” as well as 25 vocal hooks so users can flick their hand at scratching.

“Reality Decks” isn’t the first ever VR DJ app, following suit of German company EntroPi Games in their creation of Vinyl Reality which pioneered the translation of DJing into a simulation.

The race is on to see you can become the most sought-after and effective VR DJ system- they’ll have to put it all out on the decks and keep evolving-maybe bring in virtual CDJs, launchpads and synths?

You can buy Reality Decks at the Oculus Store for a casual $19, 99.

Watch a trailer for the app: