The One Way Traffic tour will be kicking off next year and features Riky Rick, Groove Afrika, Witness The Funk, & Black Motion.

The One Way Traffic tour is all about bringing to your city some of the best in house and hip hop at a price that won’t be hard on your wallet. All it will cost you is seventy bucks.

One Way Traffic will be making four stops namely Pretoria, Cape Town, and Joburg where Riky Rick, Black Motion, and Groove Africa is set to perform. Then in Durban Aewon Wolf and Witness the Funk will be headlining.

Riky Rick is known for his successful ‘Boss Zonke’ single and won a MTV Africa Music Awards this year for best video for the track ‘Nafukwa’. Witness The Funk is loved for their gqom trap sound and their single ‘Nomusa’ has been doing well too.

Groove Afrika is made up of Kgabo Senyatso, aka Ma Groovana and Kagiso Kalane, aka Don Pedro and are known for their single ‘Sin City’.

Black Motion have been producing and performing alongside guys like DJ Qness, Black Coffee, Djeff, and DJ Oskido. They are known for tracks such as ‘Rainbow’, ‘African Salsa’, ‘Fortune Teller’, and ‘Talking to the Drums’. 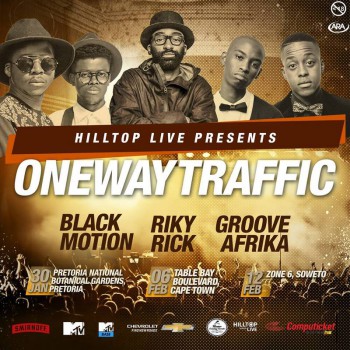 The tickets for the One Way Traffic tour costs R70 for each leg of the event and are on sale from computicket.com or from Computicket store, Shoprite, Checkers or Checkers Hyper stores country wide.