Afroforce1 Records, is a division of Universal Music Group Africa.

Afroforce1 records has been established to develop and work with local talent with the view to break them into Central Europe and the rest of the World.

Primarily based in Berlin, Germany, Afroforce1 will also now operate out of the Universal Music Group offices in Africa, unlocking huge potential for African and European artists alike.

“Africa is a young and vibrant continent – a creative superpower.

“With our great team from Afroforce1 and UMG Africa we will find, develop and equally establish artists whom we can offer the possibility of entering a new market in Europe and the rest of the world.

“This newly built bridge will also enable artists from Europe to dive deep into the unlimited font of creativity that Africa has to offer. The whole team is really excited to be a part of this adventure.”

Mi Casa is a band that needs no introduction in South Africa.

They have dominated the South African music charts for the past 10 years with a total of 8 number one singles and a wall of awards and accolades (Recipients of 5 South African Music Awards (SAMA) including ‘Best Duo Group’, ‘Best Dance Group’ and the coveted ‘Record of the Year’).

As major players in the South African pop and dance arena, the trio has kept dancefloors alive with hits like ‘Jika’, ‘Turn You On’ and ‘Don’t Wanna Be Your Friend’ amongst others, whilst being on high rotation across all pop and urban stations for the past decade. 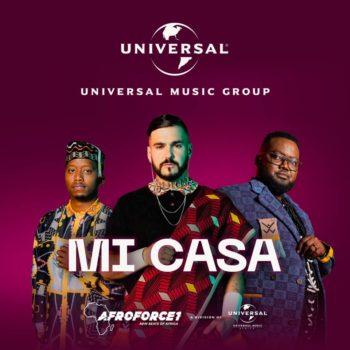 The trio consists of Joao Da Fonseca, a.k.a. J’Something as the lead singer/songwriter, Sipho Mphahlaza a.k.a Dr Duda as DJ/producer, and Moshe Kgasoane, a.k.a Mo-T as trumpeter and the band is deeply rooted in making music that carries positive vibes and uplifting energy.

They have already amassed an international following with sold-out concerts in Europe, Canada, and 23 African countries and their unflappable worth ethic has seen them maintain their status as one of SA’s most relentless, determined and ambitious touring and recording acts.

Unifying messages, soulful grooves, joyful and sexy beats, a unique brass section and that hit-making formula is held together seamlessly by the powerful vocal and front-man abilities of J’Something at the helm.

This year Mi Casa turns 10 years old and celebrate this milestone with the brand new album ‘We Made It’. J’Something promises “music you may not have expected from Mi Casa”, and audiences have already had a taste of a fresh sonic maturing with the stunning first single ‘Church Bells’, which was dropped with a Afro-punk-inspired, heavily stylized, hot new music video at the end of March.

“Finally the moment we been working so hard for.

“To sign a global deal with the biggest label in the world is something we dared to dream and now here it is – the fruits of 10 years hard work and great memories around some pretty damn cool songs.

“We believe this is the most crucial moment of our career and we can’t wait to now elevate things onto a whole new level”, he states.

With 4 award-winning albums already under their belt, a decade of space behind them to hone their craft, an international record deal and a dedicated team supporting them, Mi Casa is now set to embark on one of the most exciting eras of their career.

One thing that’s certain is that their roots are, and always will be, deeply embedded in the African soil – and as we watch them flourish, we can be proud to see them represent their heritage on the global stage.