You are here: Home / News / Marshmello is playing a virtual show inside Fortnite this weekend

Marshmello is playing a virtual show inside Fortnite this weekend

Epic Games is hosting a Marshmello show inside Fortnite.

Forbes has cracked the rumors, confirming this major gaming first to be true through a series of leaks.

On Saturday, Epic is hosting an in-game Marshmello EDM show inside Fortnite Battle Royale; yes, in the game itself. What a time to be alive (if you’re a gamer that likes EDM.)

As you can imagine, there’s a lot of info coming out surrounding the spectacle, so here’s what’s been gathered thus far:

Place: Pleasant Park (in Fortnite), though the music will be heard/lights could be seen from anywhere on the map.

Apparently, it will be its own LTM (Limited Time Mode) called “Party at Pleasant Park,” with respawns enabled, giving you the opportunity to kill each other during the show. 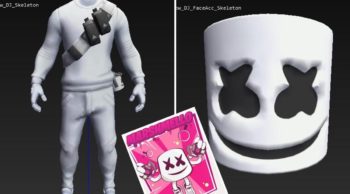 Epic Games will also release a cosmetic bundle for the show, including a Marshmello-skin, pickaxe and spray, as reported by Forbes, though there is currently no word on pricing.

There’s also leaked info that shows an animation of the DJ dancing on stage, which mimics his real-life stage persona, giving players the real feel of a show.

As for object leaks, you can expect speakers, a stage, and lights, all of which is expected to be put up on the football field at Pleasant Park.

When looking deeper at what this ‘first’ will bring to the future of entertainment, look at the nature of what this means.

Essentially you have a music artist that is performing for MILLIONS of people, which means the artist can potentially gain millions of fans, without leaving his house.

The artist is also selling cosmetic packs, of which he gets a cut, and album sales if people like his tracks.

It’s only fitting that Marshmello is the first artist featured seeing as he won Epic’s E3 celebrity invitational when he paired with Ninja.