DJ Colonel Sanders was the most talked about performer online this weekend! 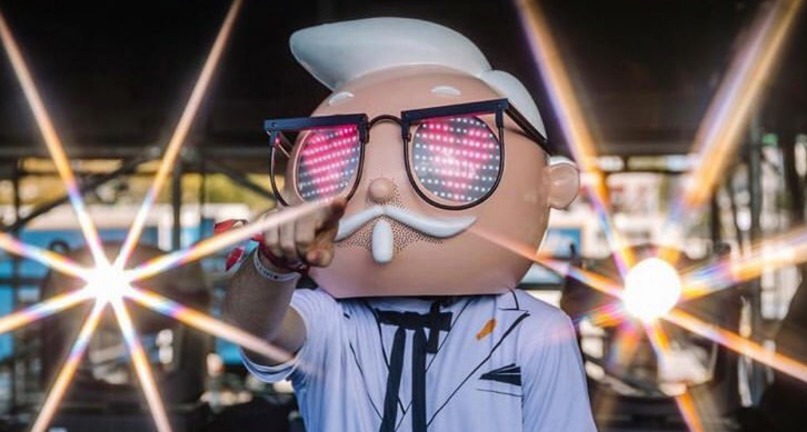 Ultra Miami boasted an impressive line-up this past weekend, featuring EDM stars like David Guetta, Marshmello and Zedd  but it was the unannounced act who played the main stage who’s generating the most buzz, and not positively.

If you haven’t seen the video yet, Ultra sold a time slot on the main stage to KFC and DJ Colonel Sanders…

Before acts like Tiesto and Marshmello performed, a mysterious figure wearing an oversized Colonel Sanders head took to the stage, subjecting the crowd to a mix of tracks riddled with chicken references.

At one point the Colonel asks the crowd if “Any of ya’ll hungry for some beats?”

As can be seen from the video footage that is climbing with views, the crowd is hilariously disinterested, probably trying to figure out how this happened.

Besides stunning the crowd to a stand-still, the marketing stunt also maddened a few past and present Ultra acts, who expressed their dismay via Twitter.

In a since-deleted tweet, EDM heavyweight Marshmello called the stunt “lame,” adding, “I can think of a lot of other artists that actually deserve to be on that stage instead. “

Alison Wonderland said it was “tacky” and suggested that the festival “could have found a better way that doesn’t cheapen what we do.”

But it was Alec Metric who hit the nail on the head when he tweeted:

“Ultra selling ad space on the EDM Main stage at one of the most commercial festivals feels like some horrendous logical conclusion to the direction that part of dance music has been heading in. It’s not exactly Ronald McDonald at Berghain is it.”

Watch the video of DJ Colonel Sanders at Ultra Music Festival below.