Kazim Rashid epitomises the life of a truly creative professional. He has held senior positions at VICE Media and Warp Records, consulted for brands such as Converse, Red Bull and Microsoft, but best of all his DJing has taken him everywhere from Croatia to Kuala Lumpur, Berlin to Brazil and now South Africa too.

British Council Connect ZA in partnership with Livity Africa and Black Mango have orchestrated what they call the Kazim Rashid’s ZA takeover. The marketing pro and DJ is currently based in South Africa for a six-week residency to learn and exchange ideas across the fashion, lifestyle and music sectors.

This Thursday Breathe Sunshine Africa Music Conference will host an ‘On The Couch’ workshop with Kazim Rashid at the Ithuba Art Centre in Braamfontein.

Kazim Rashid initially visited South Africa as part of the British Council Connect ZA ‘Creative Futures’ project, in association with Live SA and part of the Fak’ugesi Digital Africa Festival.  This year, Kazim returns to South Africa to spend time in both Johannesburg and Cape Town, collaborating on projects engaging with his creative practice and experience.

Kazim will also be working closely with the Breathe Sunshine African Music Conference to engage with music makers and promoters in both Cape Town and Johannesburg. He will participate in two workshop panels, and feature on the main line-up of speakers at the Breathe Sunshine African Music Conference in Cape Town in September 2015. In Johannesburg, Kazim will collaborate with Livity Africa, while also being based in their inner-city office space.

Kazim co-runs THE LOVE BELOW/somethinksounds – labels specialising in soul futurism. Having spent the last 4 years living in Berlin, he moved back to London to take the position of Head of Marketing for the UK, at seminal electronic music imprint Warp Records, with whom he still works with today in a limited capacity. Kazim is also a renowned A+R consultant, scout and music manager. When not releasing records, Kazim can be found running boutique marketing strategy and production agency endless-love-show, which specialises in video content for fashion and music brands. Lastly, most recently Kazim joined the creative agency, PROTEIN as Creative Director. 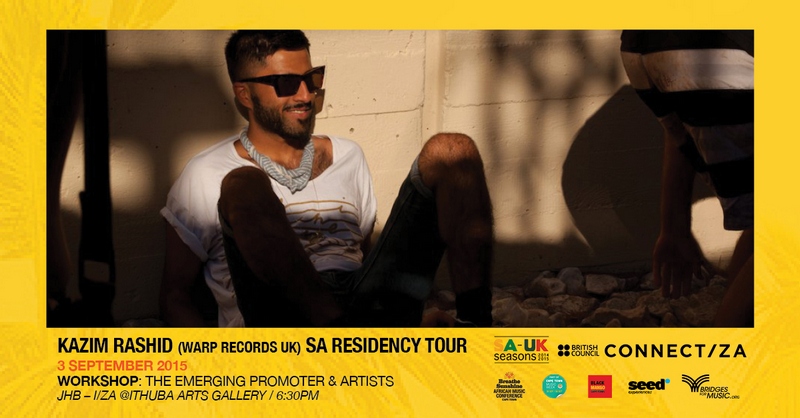 Events to look out for

This will feature Kazim Rashid and selected upcoming promoters from Johannesburg, in a relaxed environment, to openly discuss the problems faced in the industry both locally and globally. The goal is to transfer ideas and offer solutions. Register here for Thursday’s FREE workshop.

Bridges for Music Mentor sessions feature music industry people meeting with upcoming producers, artist and promoters to share their experiences with the aim of mentoring the upcoming creative.

This will feature Kazim Rashid and some upcoming promoters from Cape Town, in a relaxed environment, to openly discuss the problems faced with the main goal of transferring ideas and offering of solutions.

This will feature various top ad agency representatives, brands in the music space and artists who run brand communication agencies.

This project is part of SA-UK Seasons 2014 & 2015 which is a partnership between the Department of Arts and Culture, South Africa and the British Council.