TribeOne Festival, hosted by the City of Tshwane (“CoT”), was set to take place in Cullinan from the 26 to 28 September 2014.

According to organisers, TribeOne Festival cancelled because “site preparation and related infrastructure development required to host the Festival, being the responsibility of the CoT, fell behind schedule to a material extent, such that it was no longer realistically possible to stage and deliver the Festival to the scale and quality that the organizers had always planned. Under the circumstances, and despite efforts to seek alternative arrangements, the organizers have had no option but to cancel the event.

It’s not over till the fat lady sings

As a loving fan you might feel the need to curse and to blame. No doubt, by the sheer ambition of TribeOne Festival it would seem they tested the waters with their entire body. Ever since the introduction of Ultra South Africa, Sonar Cape Town and Big Electronic (Big Concerts’ rising little sister that brought over Armin van Buuren) ad infinitum the pressure is on for festival organisers to become bigger, better, more epic.

Ultimately, calling yourself “Africa’s Biggest Music Festival” on your first run is like Rolling Stone SA calling themselves the “Pulse of South African music.” If you feel the need to cast blame, do what everybody (including TribeOne Festival) does: blame the government – knowing that it’s the easiest thing to do in the world.

We can only hope, learn and wonder what TribeOne Festival will be doing next. Despite anything, there must be some competitive festival organisers smiling from ear to ear this morning.

Tickets will be reimbursed

All ticket holders will be reimbursed, details of this process will be announced shortly. Stay tuned fans. 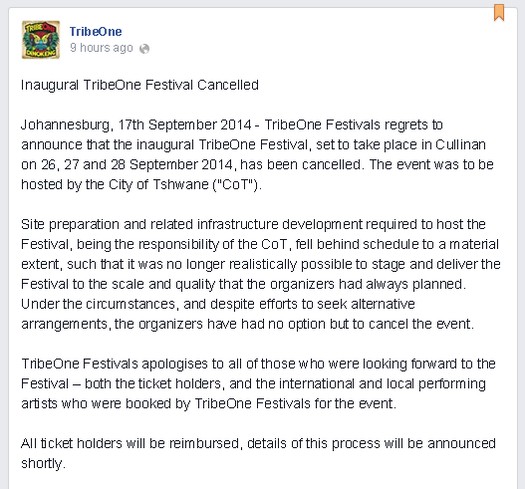