Fiesta Black has teamed up with Corruption Watch in the hope to create some attention for Anti-Corruption day which is today!

Fiesta Black has created a hard-hitting song expressing the frustration that many people feel about the high levels of corruption prevalent in South Africa at the moment.

The song is called “Hayi Basile”, and loosely translated means “They are wicked”, and it is to be released today 9 December by Corruption Watch to coincide with the United Nations-designated International Anti-Corruption Day, established by the UN to raise awareness of corruption and of the role of the UN Convention against Corruption in combating and preventing corruption. 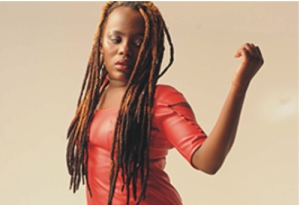 Fiesta Black is signed to Ghetto Ruff for bookings and she was the vocalist on Ganyani’s Xigubhu and has worked with DJ Mbuso, Jerah, Iggy Smalls, Chris J and international artist Byron Kino. Fiesta Black, like many other young South Africans, has experienced the effects of corruption and how people so easily get away with illegal actions.  Her decision to collaborate with Corruption Watch on this song is to use her creativity, to voice the frustrations of so many young people who feel powerless in their own country

David Lewis is the Executive Director of Corruption Watch;

Our decision to use a song to expose corruption was quite intentional,” Lewis continued, “informed in part by the results of a survey we conducted with young people earlier this year, many of whom said they would consider participating in an anti-corruption campaign that used music, art or theatre.  And it takes us that much closer to our goal of trying to build a culture of activism among the youth in fighting corruption.”

Corruption Watch will be officially launching its Youth Campaign in 19 February 2015 at an event that will feature a performance by Fiesta Black.

Obviously just releasing one song is not going to change the world or South Africa’s corruption problems. Fiesta Black ‘Hayia Basile’ is just one of the channels Corruption Watch is using to get young people involved and aware of the fight against corruption. Other activities include the launch on 9 December of a Pan-African writing and photographic competition, My Corruption Free Africa, which asks entrants from across the continent to submit their stories and images with the theme of “Corruption through my eyes”.

Corruption Watch has also collaborated with FunDza to release a seven-chapter fictional story on the Mxit platform about corruption in the licensing sector, running from 5 – 11 December. The story is also being made available, one chapter a day, on the Corruption Watch website.