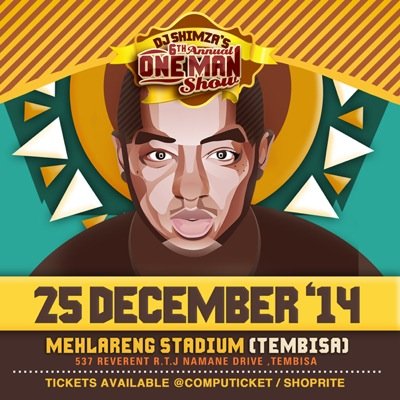 On December the 25th 2014 the DJ Shimza 6th Annual One Man Show will be making a return to the Mehlareng Stadium  in Tembisa. You will get to experience a hot bed of local talent all in one place over Christmas Day and night leading into the early hours of the morning for a proper and fat party.

DJ Shimza is the brains behind the event; he manages to rope in other local talented musician friends for the kind of party that showcases some of the most talked about artists on the South African music scene. So instead of just roast chicken, fruit cake, and Christmas carols your Christmas day can be whatever you want it to be. Fill up on your feast and then go and feast on DJ Shimza’s 6th Annual One Man Show.

The DJ Shimza 6th Annual One Man Show has been a success in all of its previous five years of success. The event is a charitable one that helps buy uniforms and stationery for under privileged school kids in the upcoming school year while also helping with job creation within Tembisa. Nice one DJ Shimza. The show and its charitable efforts were initially started by Channel O & Metro FM DJ in 2009. Big Nuz, Donald, Micasa, and Zahara are some of the artists who have previously performed at the party.

This is a strictly over 18 event

Tickets to this show are available at Computicket