You are here: Home / News / DJ Rhiannon on using female sexuality in EDM

DJ Rhiannon on how to use female sexuality in EDM

Her packaged brand is most likely the very definition of the commodification of female sexuality in edm. And, it’s nothing new; the female form has been manipulated and objectified for the male gaze in any and every industry since the fifties.

Perhaps what is unsettling about DJ Rhiannon for some is that she is an independent artist going this route without having a major label coercing her to do so.

Unfortunately, free and in your face female sexuality is still taboo in 2015 and that leaves room for someone like DJ Rhiannon to take advantage of that.

From what I can see, her music videos and tracks are purposefully sexually controversial and somehow they manage to stick out enough to grab attention.

DJ Rhiannon admits to ‘selling out’ and says…

“I do admit that it was the sort of persona or alter-ego that I was putting forth; I decided to sexualize her more in order to get more work. It was purely a business decision… me being an entrepreneur and seeing other women who were more sexualized getting more work than I was.”

I’ve sort of taken advantage of my hetero-normative, society-sanctioned hotness to market myself, get the gigs. I admit that my songs are totally obnoxious, they’re totally in your face, like super-overly sexualized.”

‘Rock The Box’, the documentary that explores the commodification of female sexuality in EDM was directed by Katherine Monk, a journalist and author from the CBC. The film was made by National Film Board of Canada. 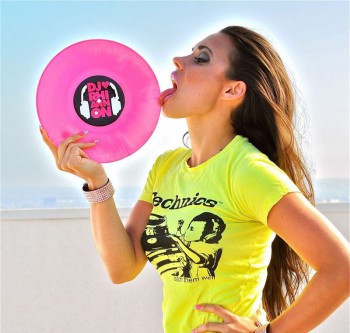 “DJ Rhiannon had the most exaggerated experience as a female DJ; there are a variety of other female DJs, and all of them had trouble breaking in. Rhiannon was the only one who sort of took a sideways step and thought out of the box.” Said Monk

The film follows DJ Rhiannon around over a period of thirty six hours and offers a small window into the life and work of the artist.

It opens up with stats on the business of EDM. In 2014 only nine percent of EDM festivals’ line ups were made up of female DJs, and according to the DJ MAG annual Top 100 list only two women made the cut.

“I played nothing but vinyl records from like 2000 to 2007… I was playing underground breaks, funky house, house, electro house, like super-underground. I played at clubs where the whole idea was to play music that no one had ever heard.” She said of her earlier DJ career

Someone like DJ Rhiannon may reinforce for some misogynists that women do in fact lack the talent and skill it takes to be seen as equal and must therefore resort to tactics such as this.  The ‘soullessness’ of her decision has more to do with the empty reasons behind her need for fame and success versus her celebrating her sexual freedom. It’s this that makes her work and image appear shallow.

For females in general, we already know that most industries are made up of boys clubs so we have to work extra hard to prove that we deserve a seat at the table. And even then, we are still largely seen as secondarily skilled to our male counterparts.  I’ve had male DJs in our local scene tell me that ‘so and so’ sucked dick and that’s why she gets gigs.

DJ Rhiannon may not embody my own thought train but that doesn’t mean that I have a problem with what she has chosen to do. It’s not my job to police what other women do with their bodies and careers. If shaking her tits and ass and writing dirty lyrics is what makes her day and helps get her gigs, let it rain.

‘Rock The Box’ was featured at the VIFF film festival a few days ago.

The source of this feature is THUMP.