Die Antwoord’s Ninja has some explaining to do after the duo were sacked from two upcoming music festival line-ups. 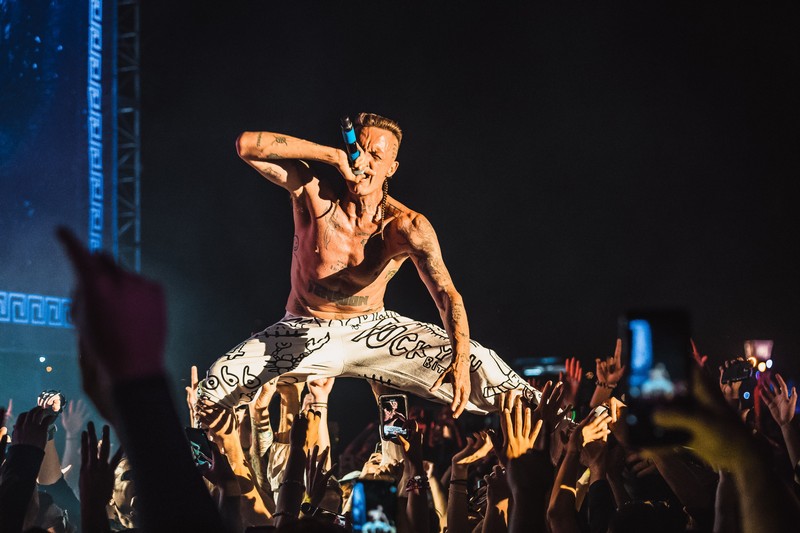 The duo has been removed from two upcoming music festivals after a video from 2012 resurfaced of them allegedly appearing to physically assault and shout homophobic slurs at Hercules and Love Affair bandmember Andy Butler.

The video was recorded by Die Antwoord’s former videographer Ben Crossman and depicts the duo’s altercation with Butler at Future Music Festival in Adelaide.

At one point, Nina runs to Butler and spits in his face followed by Yolandi shouting “Run, fa**ot run! Run for your life bitch.”

The diabolical duo has been subsequently dropped from the line-ups of both Louder Than Life and Life is Beautiful festivals.

Not a hate crime- Ninja

Yesterday Ninja took to Facebook in response to the allegations, claiming that the video was “cleverly edited” by a scorned employee (Crossman) to make them look bad.

“This was just a fight with someone who fucked with us. Not a hate crime,” Die Antwoord’s Ninja wrote.

“This fight had nothing to with the fact that this guy was gay. We dont [sic] care about people’s sexual preference. Our DJ and best friend DJ HITEK is gay, and alot [sic] of people in our crew are gay. But if a person (no matter what their sexual preference it) keeps harassing us over and over, then physically harrasses ¥o-landi, there will obviously be repercussion [sic].”

He goes on to write that Butler had “followed ¥o-landi into the girls bathroom and wouldn’t let her out, and she had to physically push past him to get out of the bathroom.”

Just watch the video of Die Antwoord vs Butler and see how Yoandi pretends to be upset to cover up their disgusting behaviour.

Do you buy the explanation by Die Antwoord’s Ninja or are they just really horrible people?