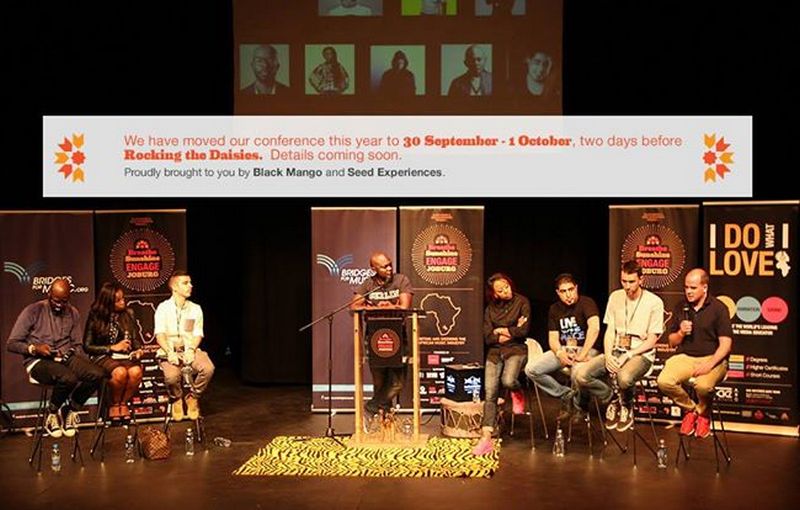 BSAMC – or the Breathe Sunshine African Music Conference if correctly named, has partnered with the Rocking the Dasies festival to release a special tickets deal where for R400 you get access to the two day conference and a Rocking the Daisies ticket which also includes access to the RTD Hospitality Area. (Tickets are limited).

UPDATE: We received word late on Friday afternoon that this R 400 combo ticket is intended for music industry people only. You will be required to complete an online form as part of the industry vetting process.

So if you consider yourself ‘a part of the music industry’, go for it! For 400 bucks it’s a steal… two days of music biz stuff followed by two days of partying at Rocking the Daisies. Life could be worse…

Taking place during Cape Town Music Week, the much-anticipated Breathe Sunshine African Music Conference [BSAMC] will bring its blend of music, collaboration and inspiration to the city on 30 September and October 1st 2015, the two days before Rocking the Daises.

BSAMC is an annual event which aims to empower and unite the African music community.

What to Expect at the conference

BSAMC is a combination of;

The event is a must for all musicians, DJs, Producers… in general all aspiring artists and industry personnel should want to attend.

BSAMC is attended by more than just local delegates.

The conference has always attracted delegates from across Africa and further afield, including Europe, the United States and the Middle East. The inaugural event saw the Event Director of the Amsterdam Dance Event [ADE] – Europe’s biggest conference dedicated to electronic music attend, which also resulted in a special South Africa being the focus at the following ADE in Holland. IDM Mag editor, Dave Mac was one of the delegates to sit on the South African panel discussion at ADE.

We joined forces with Seed Expieriences last year and this year the fruits of the partnership are evident with this amazing ticket deal.  We are also really excited about our venue change which facilitates a much more fun and dynamic environment.  Sure everyone wants to learn and network but this is the music industry, one of the most exciting in the world and we plan to ensure everybody has a great time while they are learning” says BSAMC director Trenton Birch.

Powered by Black Mango and Seed Experiences, event speakers, performers and attendees at past events have included, amongst others… 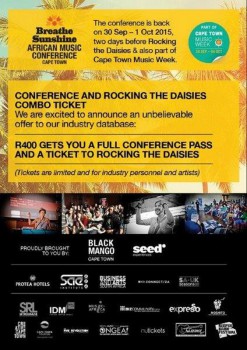 Breathe Sunshine African Music Conference [BSAMC] also focuses on the upliftment of rising talent in the community while inspiring industry professionals, through a series of workshops that it runs throughout the year in the townships with Bridges for Music and SAE Institute.

For more information on this event, visit the BSAMC website.