In celebration of this impressive milestone, the company has released an infographic charting their legacy and influence.

From launching their site in 2004 with 79 electronic music labels in their catalogue to seeing that figure grow to over 100 000 a few years later, Beatport has consistently grown into being the powerhouse brand and pillar of electronic music it’s known as today.

Having branched out, Beatport boasts an impressive foray of subsidiaries, including Beatportal, Beatsource, Beatport Sounds, Beatport Hype, Beatport LINK and Beatport CLOUD, which all contribute towards the main goal of making buying and streaming music and sounds as easy as possible.

So far, the company has won nine awards and as they celebrate 16 years in the industry, we’ll break down some of the stats from the infographics.

One of their most impressive figures pertains to the number of downloads they’ve had over the years, which is 259 million. This is especially impressive considering they hit 100 million in 2012, which was raised to 200 million in 2017,

In following through with their dedication to help out independent dance record labels, Beatport has paid these labels upwards of $300 million, which is way more than other platforms.

Beatport’s CEO, Robb McDaniels, commented, “It’s been a ground-breaking year for Beatport. With the launch of LINK and our continued success as the world’s largest DJ download store, Beatport is moving into 2020 stronger than ever. The global DJ community is going to see innovative tools and services coming from Beatport in 2020 as we continue to evolve our company.”

Beatport celebrates 16th anniversary; check out their infographic below. 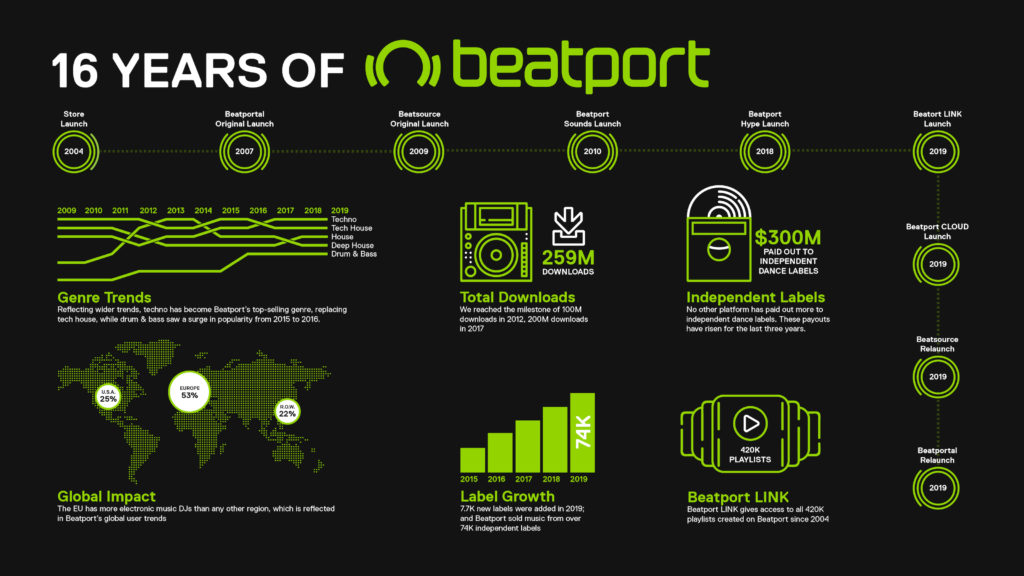