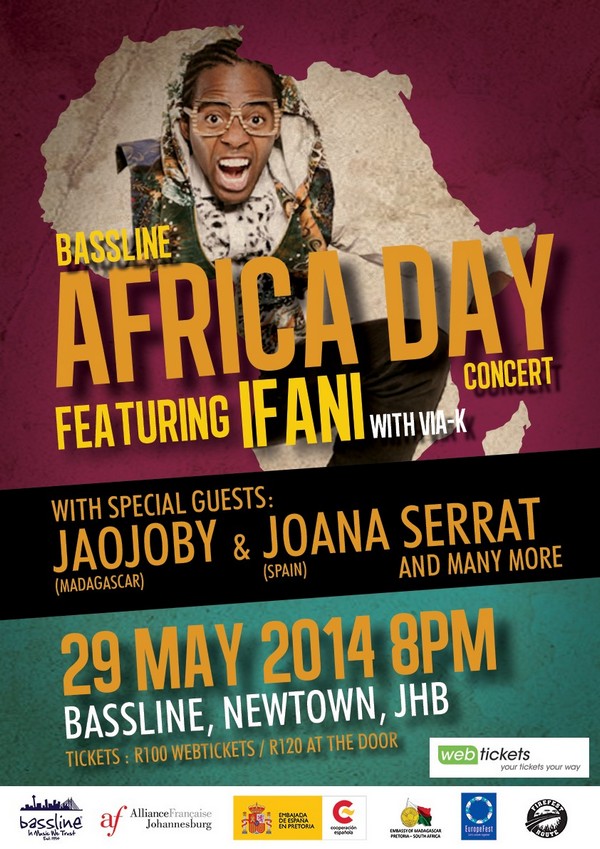 Bassline Africa Day is a concert taking place on Friday the 29th of May 2015 and features iFani.

The concert is aimed at celebrating the diversity in African musical talent and bringing the experience all to one place. They pride themselves on always delivering the finest artists and musical styles.

iFani, one of South Africa’s local rappers will be headlining the event along with a heart-warming selection of other African talent.

The afro-centric energy of the Bassline Africa Day concert makes that it is an annual calendar favourite for those who have come to know and love it for what it showcases and represents. It’s all about the positive and powerful performances from the rich and often untapped well of African music and culture and the diversity with which it is served.

The focus of the night is one of unity, an infectious sentiment that is felt strong and carried through by all those who attend the concert.

Forming part of the Southern African festival circuit, THE FIREFEST ROUTE, the Bassline will also feature popular Madagascan super-group Joajoby, they will be performing ahead of their visit to the MTN Bushfire Festival. Joajoby, whose tour is supported by Alliance Francaise, is widely known as the most popular group in Madagascar and the Indian Ocean islands. The lead singer of the group is commonly referred to as the “King of Salegy.”

Another FIREFEST Route artist to perform will be the Spanish folk singer Joana Serrat, whose tour is supported by the Spanish Consulate in South Africa.

The Bassline Africa Day Concert will be the first show in iFani’s upcoming nationwide tour and he promises a massive stage show including performances from the dance group Via-K. These live performances will be followed by a line-up of local South African DJ’s.

The Bassline Africa Day Concert Tickets are on sale for R100 at Webtickets, or R120 at the door.