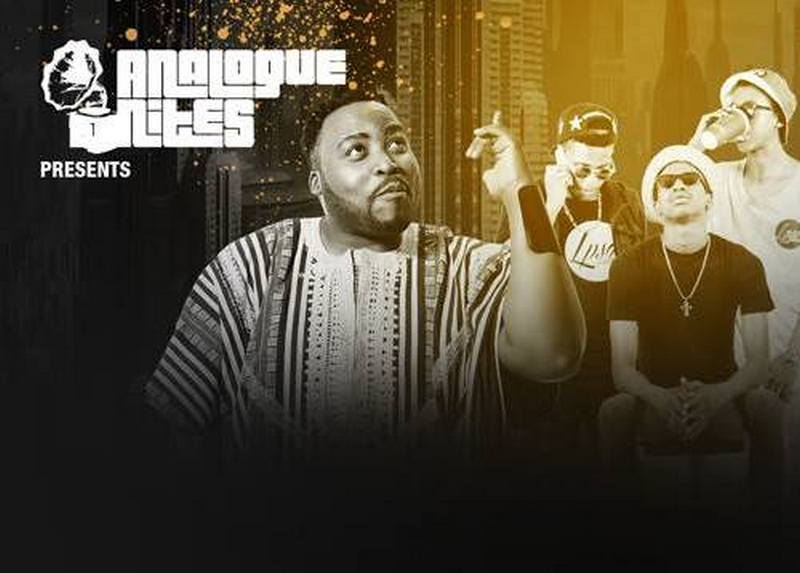 ANALOGUE NITES presents Tumi and Witness The Funk (WTF). Tumi Molekane formally of ‘Tumi and the Volume’ will be presenting his new album ‘The Return Of The King’.

The next ANALOGUE NITES event will take place on Thursday the 1st of October 2015 at the Niche Hangout in Rosebank, Johannesburg.

Tumi will be performing with live stage instrumentation, and his hit single ‘Visa’ will also form part of his set list. This artist has been and continues to be a formidable force in the development and innovative nature of our local hip hop scene.

Also performing on the ANALOGUE NITES stage is WTF (i.e. Witness the Funk). This original “Gqom TRAP” hip hop trio from Durban is made up of producer Aux Cable, and rappers; Efelow and Moshine Magnif.

Witness The Funk are working on their debut album titled ‘Finding Nomusa’ and the release will include their popular tracks – Wangnika, Nomusa (Ratchet Trap) & Nothing On You. 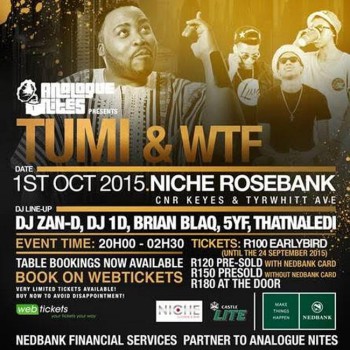 “I named it that because I am a leader in my genre and I have spent over 15 years pursuing greatness. My name is Tumi and I am a King.”

Check the king out in full effect next at ANALOGUE NITES along with Witness The Funk.

R120 pre-sold with a Nedbank card

R150 pre-sold without a Nedbank card

If you’re a Nedbank card holder, you will qualify for a 20% discount on the ANALOGUE NITES ticket price if you purchase online online from Webtickets and selected Pick n Pay outlets before 1 October 2015.

Nedbank will also provide an express payment facility if you would like to buy your tickets on the day via a mobile point-of-sale solution, PocketPOS™.