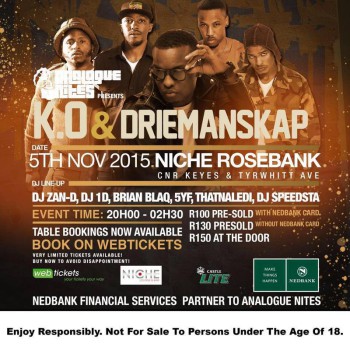 ANALOGUE NITES is proud to present one of the formidable players in the South African hip hop landscape, KO, who has a very impressive resume behind him. His debut solo offering, Skhanda Republic, has won KO numerous awards and much respect both amongst his peers and industry critics with his game changing singles such as Caracara and Son of a Gun.

Whilst most hip-hop artists are releasing ‘turn up songs’ and club bangers, Driemanskap is the vanguard of the new generation of South African rap artists unperturbed by the mainstream showbiz other than their love for what makes them different – the Spaza sound and movement that represents Cape Town’s unique rhyme style that combines isiXhosa, with English and Cape Flats slang. This 4-man crew, made up of members El Nino, Ma-B, Redondo and Dla, has gone from strength to strength, driving crowds crazy with their high energy, hurricane-like performances.