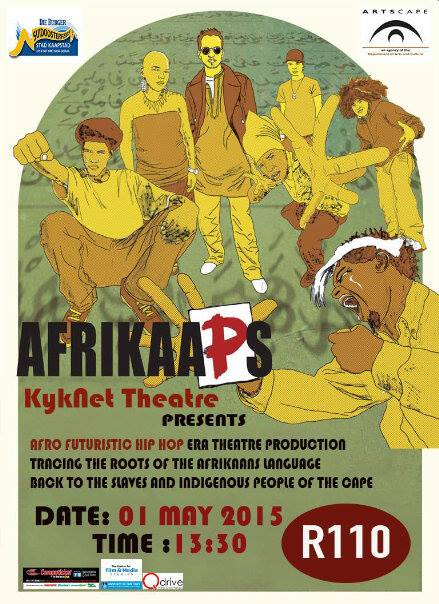 Sponsor a child a ticket to experience ‘Life Changing Theatre’ at the Afrikaaps Hip Hop Musical. The show is all about the original pidgin version of the language that was created by the slaves, Khoi, San, and the various different races of the Cape slaves.

The life changing theatre that these kids are to experience will run for one day only at the Artscape Theatre as part of the Suidoosterfees on the 1st of May 2015.

The pledge here is that you help contribute if you can to the purchase of a ticket for a child who would otherwise be unable to attend the performance.

The youth will be brought in from the Cape Flats and surrounding areas to watch the local play that is also an international award winning show.

The aim is to take kids to the theatre who have previously never had the pleasure or opportunity to do so.

The previous year, various private donors including the Dutch Consulate paid for the tickets and packed out a performance that was an audience full of young people.

“Change is sometimes as simple as supplying people with new opportunities or view of the world. Bring your whole SCHOOL and FAMILY along. Come learn a new truth about our country and yourself.” – Emile

If you are a local you can buy a ticket and give a young person or two a memorable day out at this link then you can email Emile the e-ticket and it will be passed on to one of the deserving kids.

If you’re an international fan and supporter of Afrikaaps you can buy tickets by sending money via Western Union to Emile Jansen and then email the code to fetch the cash and he will buy the tickets.