The Africa Day 2016 concert is less than two weeks away and if you go you will get to experience a celebration of African music and unity. 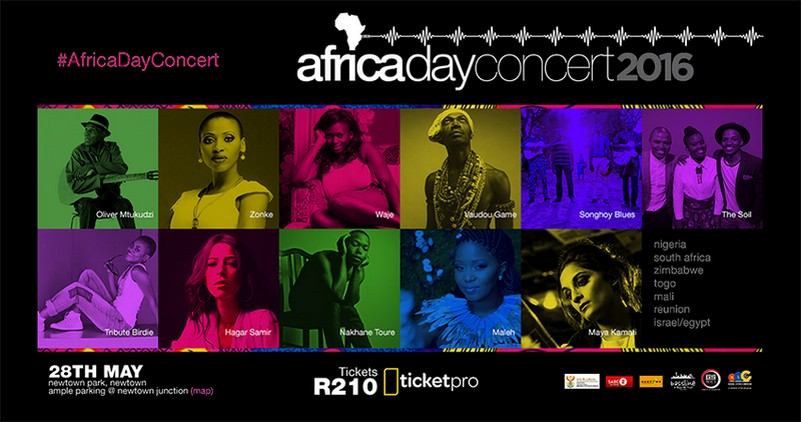 The Africa Day 2016 concert is in its twelfth year at Bassline in Newtown, Joburg and the event is being sponsored by the South African Department Of Arts And Culture. There is a strong focus on reinforcing unity, and at the same time honouring the diversity of all African nations.

The Africa Day 2016 concert will take place on the 28th of May 2016 at 4 PM and will feature a line up of African musicians who are stars in their own right.

Exciting female acts to take the stage will be artists such as Zonke, South African singer and producer, Waje, Nigerian superstar, Maleh and The Soil from South Africa, Hagar from Egypt and Maya Kamaty from Reunion.

Male artists will include artists such as Zimbabwe’s Oliver Mtukudzi, Mali’s Songhoy Blues, Vaudou Game from Togo and Nakhane Toure from South Africa will join them.

The line up has been put together in order to represent a cross section of the rich African culture on our continent. What is more, you will get to experience this one of a kind unity all the while having a fun night out.

Award winning dance company MIDM (Moving Into Dance Mophatong) will be accompanying selected acts on stage and will also launch the ‘Jaiva Afrika’; an African party dance derived from dance moves from Togo, Nigeria, Gabon and Zimbabwe. All of this will include a signature move from Zimbabwean legend Oliver Mtukudzi, this dance is intended to get everyone involved and unify the audience with song and movement.

Leading up to the Africa Day concert you could win an opportunity to watch Nakhane Toure on the 20th May and Oliver Mtukudzi on the 26th May perform unplugged shows at the Kaya FM Studios in Parktown North on the Georgie In The Afternoon show.