You are here: Home / Featured / Regular Features / Why all Laptop DJs should learn to play on CDJ

Why should Laptop DJs learn to play on CDJ? 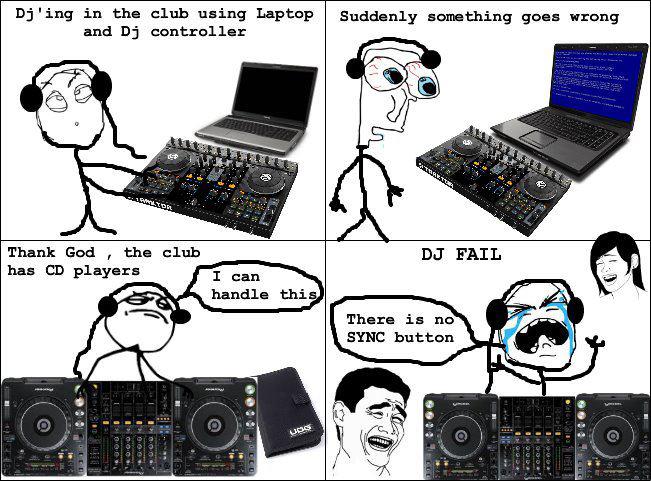 I get really irritated when yet another DJ goes online and decides to diss the Laptop DJ and paint them all with the same brush – as amateurs or the bane of their lives.

It’s usually by a DJ who feels threatened by the thought of losing out on gigs to a next generation DJ as he or she feels like the Laptop DJ did not put in the same hours to get where they are.

But here’s the thing…

Vinyl and CD DJs can suck too!

The problem with Vinyl and CDJ is that because one has to spend a fair amount of time learning to beat-match too many DJs think that once they can mix, they are the biz. Any seasoned DJ will tell you track selection and understanding the dancefloor is 10 times more important. One could argue that if you use a Laptop and sync tracks, it frees up more time to explore and learn what works well together, instead of just focusing on matching beats.

And let’s be honest, beat-mixing is not rocket science.

The argument that learning to beat-mix forces one to get to know one’s music better is also flawed. In this age of disposable digital music you’ll be hard-pressed to hold onto your tunes for too long before the next guy appears with a fresher set. Music output today is simply too fast to play the same tunes for a year like you could in the days of vinyl only.

Hey Laptop DJ! Learn to mix on a CDJ dammit!

I do think the Laptop DJ should learn to play off CDJ. Although being able to mix off vinyl or CDJ does not guarantee anything other than the fact that if you can do it properly, you’ve spent a fair amount of time practising. Well done.

It has to be said that this still does not teach you track selection and how to read a dancefloor. Only experience or innate musical talent can do that. I have been DJing for 17 years and I can honestly say that I am a better DJ now than 10 years ago when I was probably regarded to be at my prime.

But here’s why I think all Laptop DJs should learn to play of CDJs.

Every genuine DJ (not the palooka wannabes) wants respect from his or her peers. If you’ve been playing off laptop for a while, do yourself a favour and hook up a CDJ100 or CDJ200 set from somewhere and learn the basics of how to mix without any visual aid. I suggest these older legacy models from Pioneer DJ because they were the industry standard much like the Technics SL1210 turntables. Don’t just learn on the latest gear! The new media players such as the CDJ900NXS and CDJ2000NXS from Pioneer DJ or the SC2900 or SC3900 from Denon DJ are piss easy to mix on!

First you get the visual aid of the audio file displayed in full wave format so you can see the breakdowns etc, and secondly you get a BPM counter that is way more accurate on the new media players and when a track is in it stays in! On the old CDJ100 you’d often have to keep coaxing the track in every 8 or 16 beats, kinda similar to an SL1210 although not quite as tricky.

Beat-mixing is what defines us and it is part of our history as DJs so if you are serious about this wonderful culture that has blossomed over the past decade, being able to mix oldskool (yes vinyl DJs CDJ100’s are also oldskool now) will gain you mega respect amongst your mates and professionals.

With products such as the new Pioneer PLX-1000 turntable coming out soon or even the Numark NV Controller which aims to make you put your laptop under the counter rather, it’s clear that the Laptop onstage is not as cool as it may have been.

But here’s the final rub…

Simply put; a 20 year old newbie pitching up at a gig and dropping a set mixed of CD sends out a message that you’re more serious about your DJing than a newbie Laptop DJ. And as a newbie being taking seriously is a lot of work.

Leave the Laptop DJ stuff to us oldskool guys. We have nothing left to prove.