Boom Fest 2018 was an incredible experience. 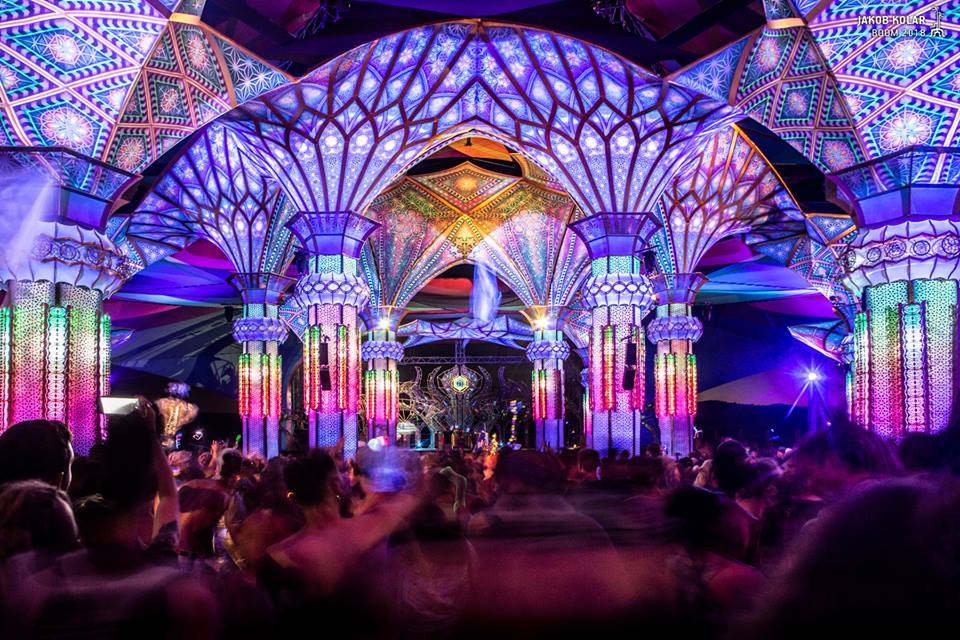 Once I’ve caught my breath I shall publish a review/overview of the event to help those that haven’t been, better understand why the top psytrance artists in the world call it the ‘mothership’ and refer to BOOM as the pinnacle of the global psytrance scene.

But for now, here’s some feedback on which performances really grabbed my attention at Boom Fest 2018.

I want to emphasise though, that this list is 100% subjective to my experience and according to my time clock – there were, no doubt, other performances that rocked the event which I did not see.

Also, even some that I did see, I may have just been in a different headspace, or not quite as ‘psychedelically induced’ at the time, if you know what I mean 😉. 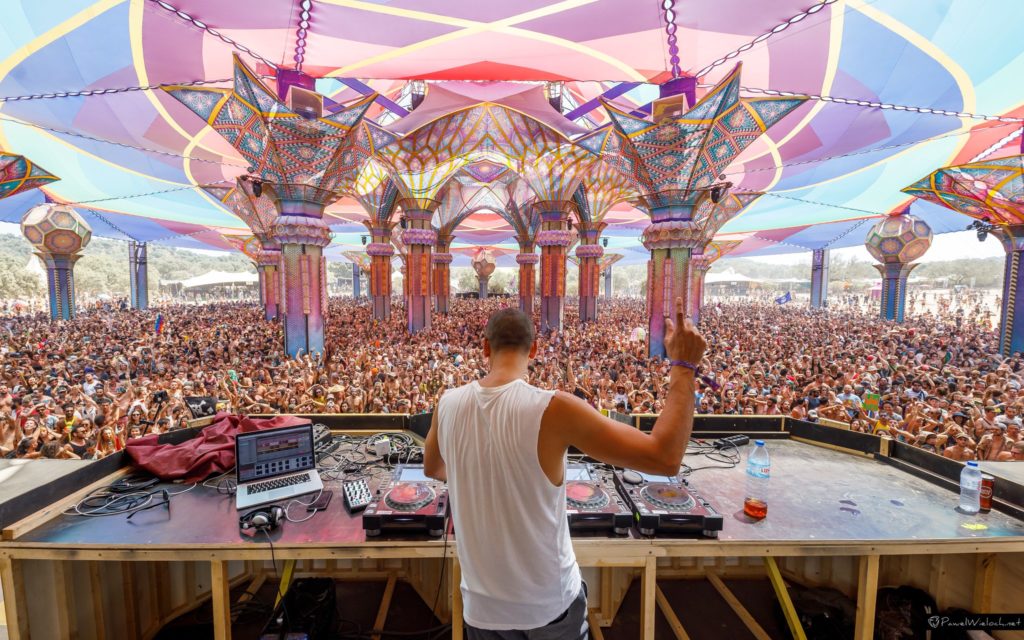 Astrix is a master of his craft and delivered a seamless set that had the entire floor in the palm of his hands from beginning to end. There is no doubt that, despite his humble demeanour, he is a psytrance superstar and the way in which he controlled that massive dancefloor was amazing to watch from a DJs perspective.

Other than the opening ceremony, this was the fullest the Dance Temple was at any given time of the party. I would have rated him higher but in fairness I was not present for the full set, but from what I saw and heard, he absolutely nailed it. 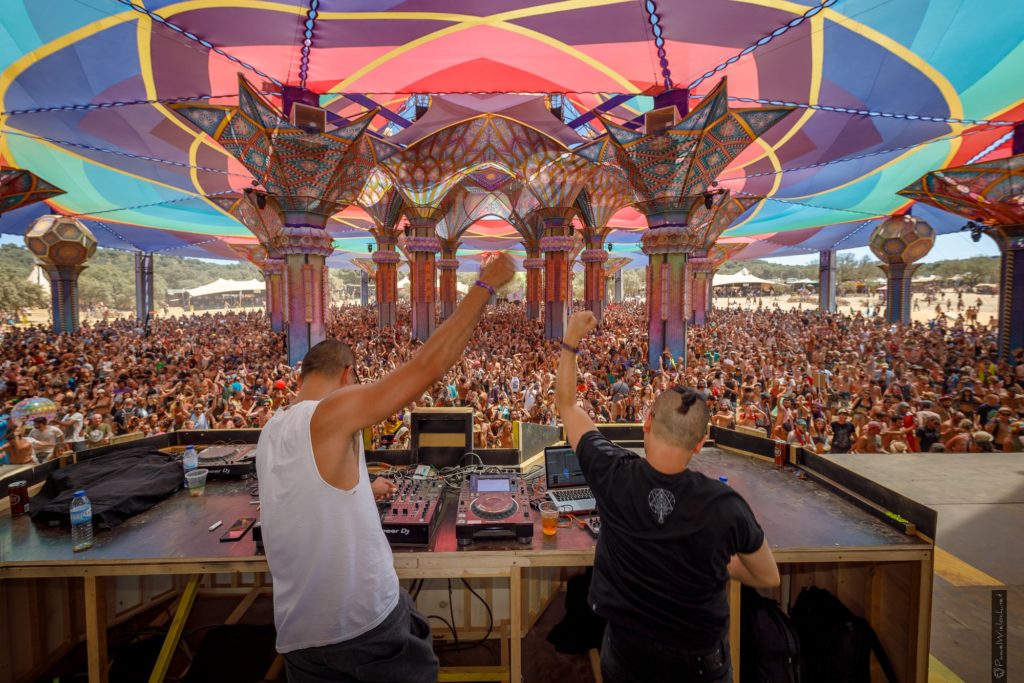 Alpha Portal are proof that people really don’t know or pay that much attention to who the artists are beyond the hype. Whilst the dancefloor was still relatively full (massive by most other dancefloor comparisons), it did not compare to the size of the Astrix floor two days earlier, nor when Ace Ventura played the previous day.

How strange is that?

Nonetheless, they delivered a seamless and highly professional DJ set, proving that they are more than just very good music producers and as their set progressed the floor packed out more and more.

Mad Maxx was just what the doctor ordered for me on what was a massive day that also featured Cylon, Waio, Astrix and Perfect Stranger for the daytime slots.

Playing before Astrix, he delivered a set packed with dancefloor bangers that really lifted the mood to another level. I’m looking forward to seeing him at Alien Safari Sprung next month. 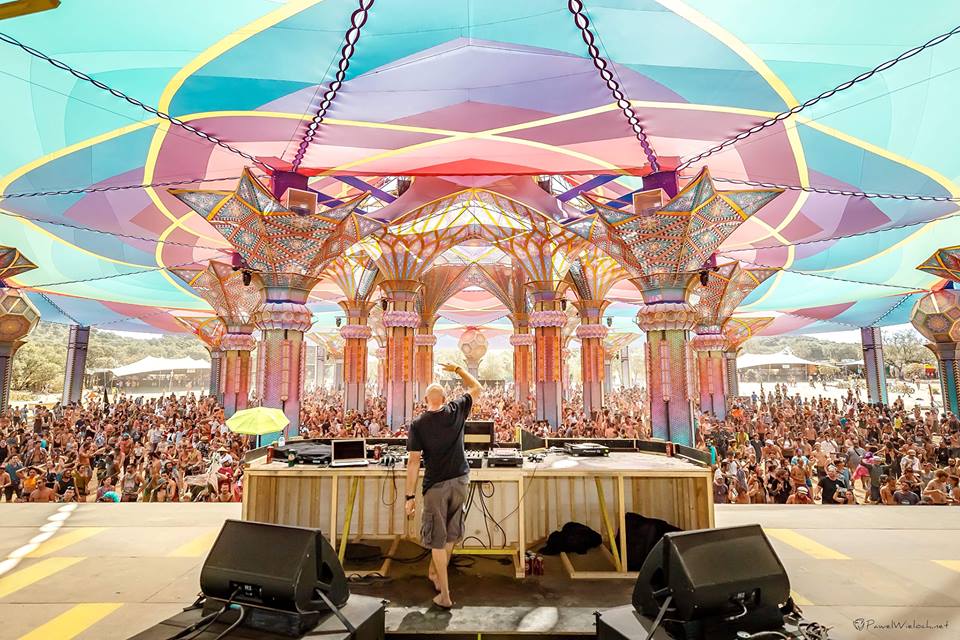 Although I 100% enjoyed Alpha Portal and respected their slick DJ set which certainly sucked me into the middle of the floor, I must be honest, they sounded kinda ‘bubble gummy’ when they started, after Dickster had laid down the law on that Saturday morning, just before them with gritty, groovy psy.

Dickster plays highly intelligent, layered psychedelic music with a signature groove that is all his own and for pure originality and ‘psychedelic know-how’ he had my attention from start to finish. 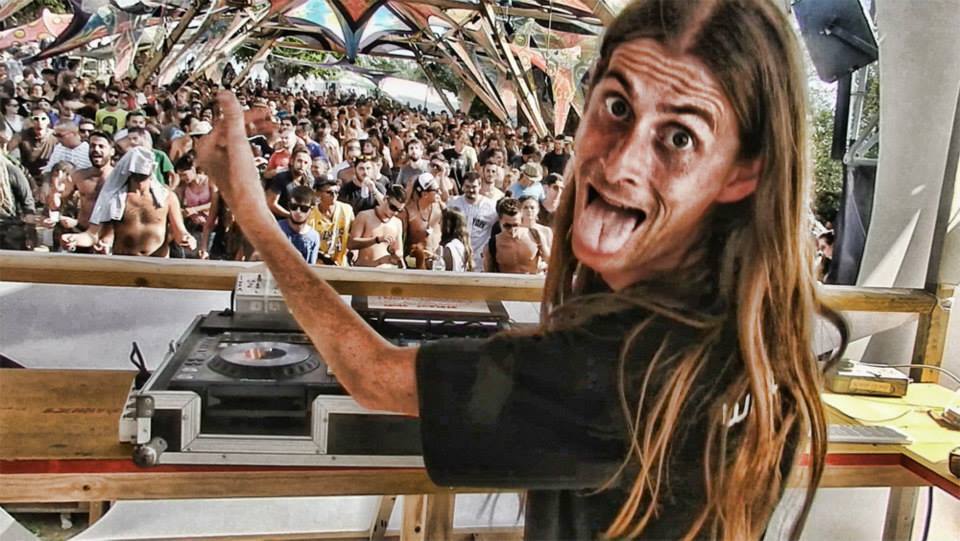 EVP played after Regan had set the tone for what was my favourite night time at Boom fest 2018. This night’s music was perfectly curated with each set a notable progression for the previous.

EVP’s set was a masterclass in intelligent night time psychedelia that kept the floor in a suspended state of motion throughout. 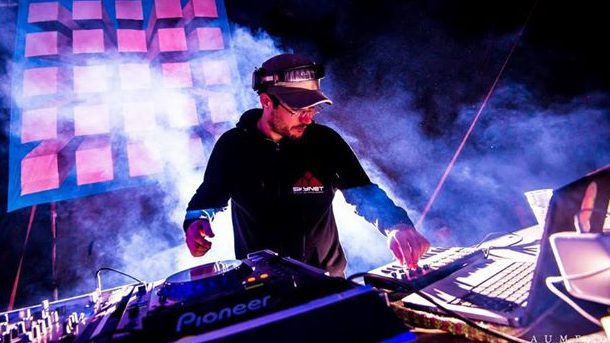 Whiptongue played after EVP and to be honest they were on par as both served up massive slabs of hard, woody bass smattered with layers of trippy psychedelic noises and squelches.

The curation, as I mentioned, was perfect because Whiptongue just increased the intensity a bit after EVP, which was perfect at 03h30 am. 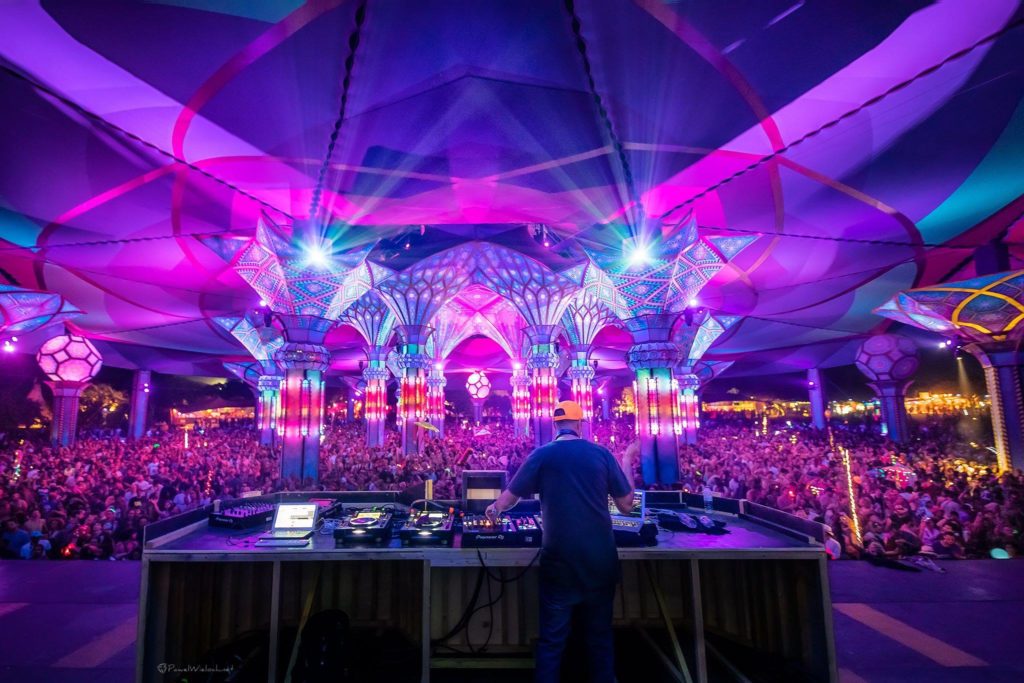 If I learnt one thing new about my old mate Regan it is that you simply can’t beat experience.

Since relocating to the UK Regan has been tearing up dancefloors all over the globe and it showed in his mammoth three-hour set on the Tuesday evening into Wednesday.

Masterfully holding the floor in suspense and then releasing the throttle at well-timed intervals, this was, without doubt, one of the best sets I’ve heard him play. 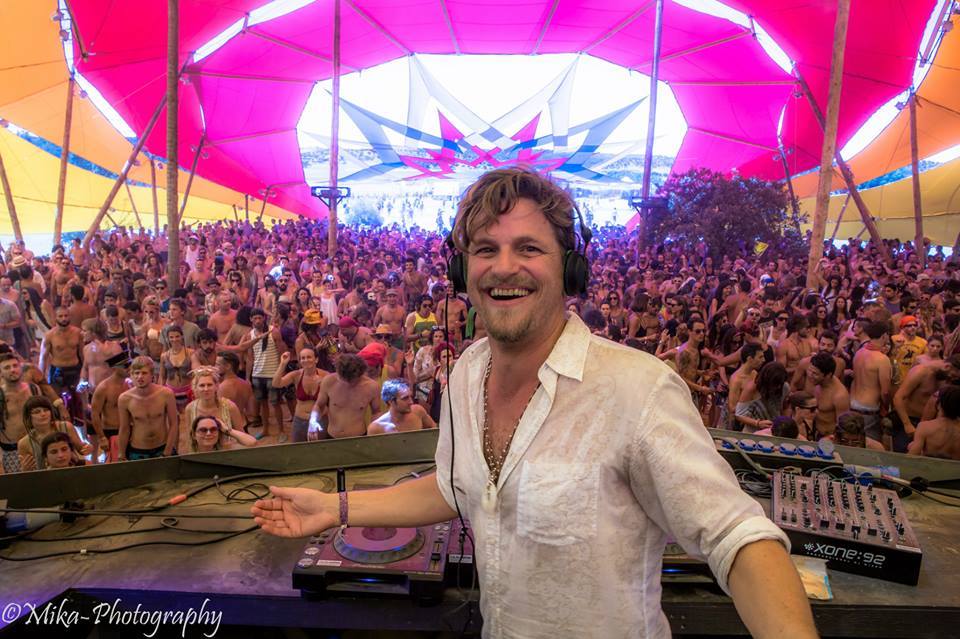 James is an absolute ledge of a person and notwithstanding my genuine fondness for him as a human being, his DJ sets just oozed class.

I first had the good fortune to catch him at the Funky Beach Bar on a gorgeous Wednesday evening just before sunset. The sun only sets between 9:30 and 10 PM and this was one of those special postcard moments when everything from the music to the people to the setting was just perfect.

He also closed the Alchemy Stage on the last day and although I split my time between his set and the closing set by Burn in Noise at the Dance Temple, the time spent there was legit. He was dropping bomb after bomb of slinky, kinky techno infused deep house and had the floor in his pocket. Tearing myself away to head back to the Dance Temple for the close was not easy. 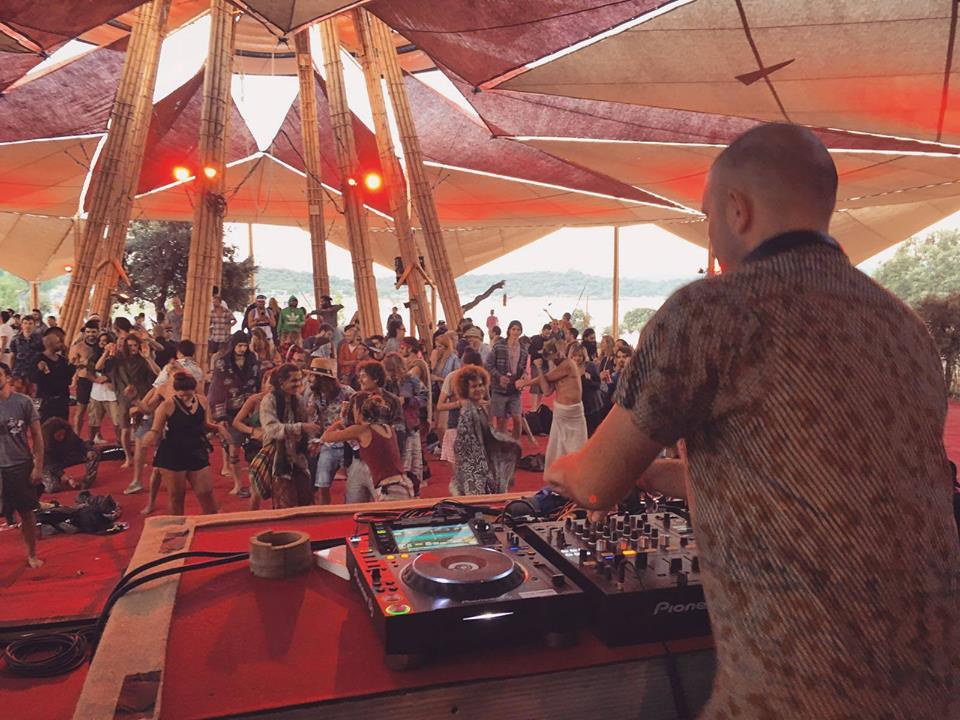 Pedro performing one of the three sets he played at BOOM 2018, this one at the Chill Out Gardens

I mentioned the picture postcard moment at the Funky Beach Bar earlier.

Well, before James Monro played, one Pedro Martins, a Portuguese DJ/Producer who has incidentally released an EP on Monro’s 4DigitalAudio label, as well as many other tracks on his own imprint, Karakter Records, casually strolled up to the decks to drop a blistering 2-hour set of the funkiest, grooviest, most un-cheesy but somehow perfect beach party grooves.

I don’t know where he gets his music, but I want some of that action.

His, along with James’ set that followed at the beach bar, was one of the top moments for me at Boom Fest 2018. 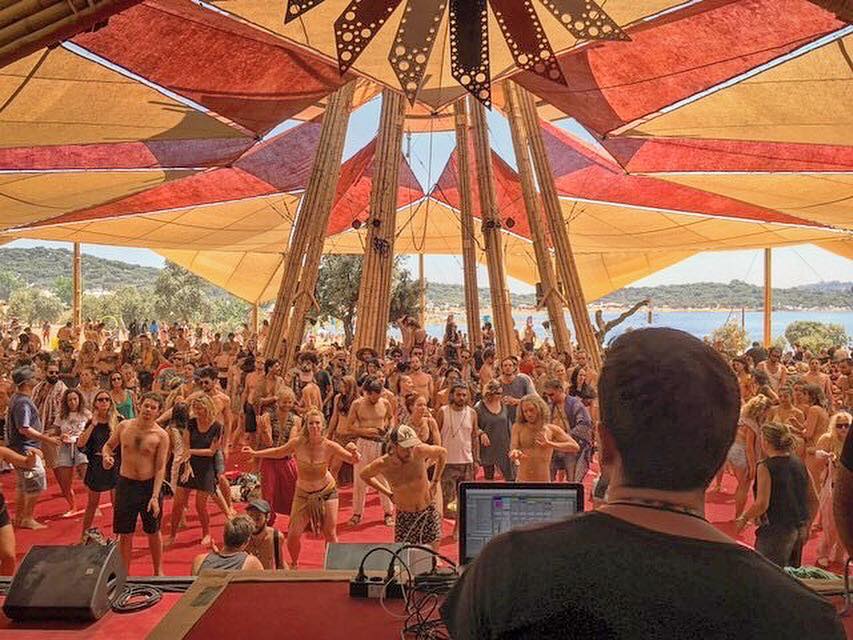 Back in 2013 I watched Black Coffee perform at a Bridges for Music Boiler Room party at the Amsterdam Dance Event. It took an excursion overseas, surrounded by a mainly European audience, for me to fully appreciate how good a DJ he is.

Similarly, although I have always been a fan and supporter of his music, Sadhu Sensi’s set at the Chill Stage at Boom Fest 2018 made me realise just how incredibly talented Andrew is and how deep his music goes.

Andrew dropped a sublime set to a packed floor which led to a rousing ovation at the end. It may have been the chill stage, but he had a solid group of people dancing to his music along with hundreds more kicking back, soaking up his deliciously gorgeous grooves.

This was probably my favourite set and moment at Boom Fest 2018. 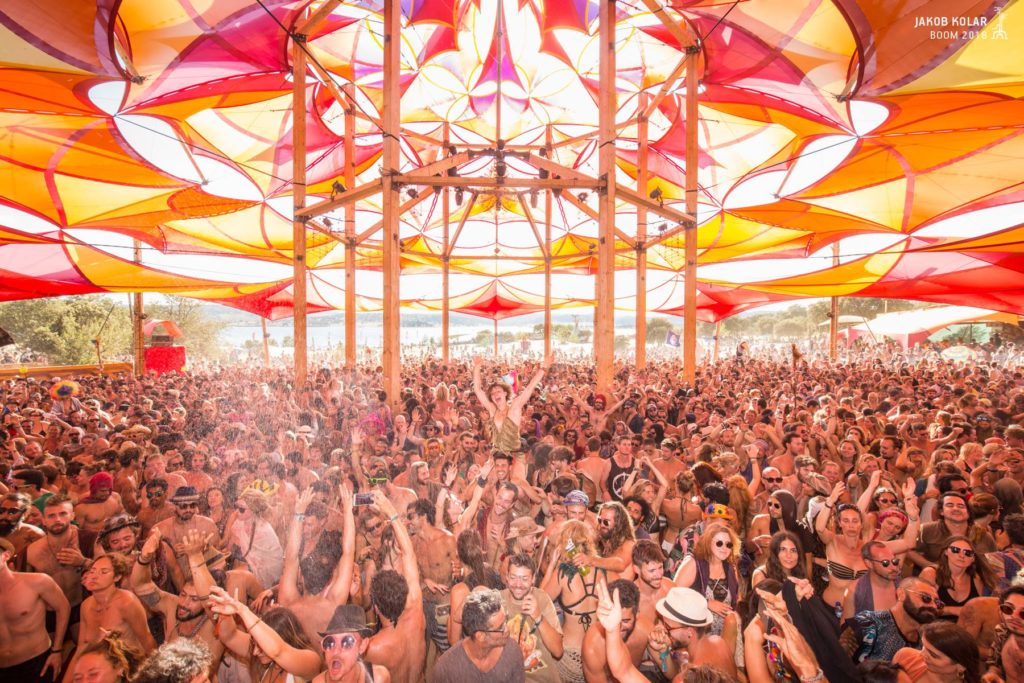 Tristan: 4 hr marathon set on the last day at the Dance Temple. Pure psychedelic bliss from a master at work.

Avalon: played straight after Alpha Portal and before Tristan and absolutely blitzed the crowd.

DJ Thatha: a goddess behind the decks, Thatha effortlessly controlled the floor on opening night.

Perfect Stranger: had the unenviable task of playing after Astrix and proceeded to take control of the Dance Temple with his unique psychedelic techno. Also played a blistering set at a pop-up stage during the lunar eclipse.

Zen Mechanics: ended the second day with a cracking set of daytime psychedelia.

Aah Yeah: Regan and Dickster’s downtempo project at the Chill Out Gardens was filled with dubby, trippy delights.

DJ Anestetic: had the tough job of playing an early set on the first morning to a dancefloor that was probably a bit tired from the first night’s shenanigans, but he put a real spark into everybody’s feet with a set filled with full power bangers.

Eat Static: I dd not catch his chill set but Merv kickstarted the Wednesday night Dance Temple with a banging set filled with classics and newer tracks with his signature Alien samples throughout.

I also got to perform at BOOM Fest 2018 this year.

I was lucky enough to be in the right place at the right time, playing a set in the presence of the Boom Festival partners, unbeknown to me when it was happening, and they offered me a booking thereafter.

Whilst DJing has been a massive part of my life, I have always viewed it more of a passionate hobby than a career or job and I really admire those that pursue it full time as it is certainly not an easy life.

After Boom I have even more respect for the pros in the business.

Notwithstanding the fun of playing, I would highly recommend Boom Festival to any lover of psytrance and alternative psychedelic culture; it truly is an unforgettable experience.

I played for 2 hr, 20 min in the end and whilst the floor was nowhere near capacity, it is true what they say; ‘the Boom dancefloor never empties,’ so I still had a great experience.