Like most of us, Denmark’s Lasse Larsen, known musically as Audiodact, fell in love with music of the psychedelic nature after being introduced to it by a friend. It was after attending Iboga’s 15th anniversary party in Copenhagen in 2012 that he was hooked and began his journey of producing progressive psytrance.

After releasing singles on labels like Tesseract Studios, Blue Tunes Records and Dynamic Records he released his track Homebound on Iboga Records in 2018 and he hasn’t looked back since. In 2019 Iboga label boss Banel asked him to write an album and three years later here we are.

Audiodact’s Reveries presents an emotionally charged journey beautiful in melody that will allow listeners the opportunity to escape daily life and enter a daydream.

We all have our reveries, and this is Lasse’s.

AUDIODACT: Thank you. Yes, it is! When Banel asked, I’d released a couple of singles and EP’s. I was up for it, feeling very happy and excited but at the same time, having no idea what kind of journey I would go through.

Bassline keeps you grounded, while the melodies can take your mind on a journey.”

As a Danish native, what was it like to see two fellow Dane’s and Iboga label heads Emok and DJ Banel put Denmark on the psychedelic map? And what influence did they have in you pursuing this genre of music? 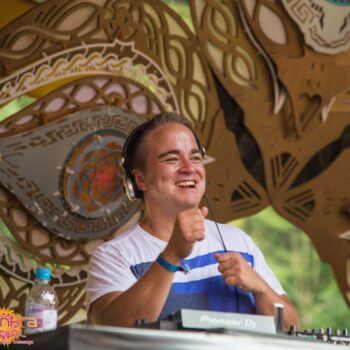 AUDIODACT: It’s quite an achievement I must say. It’s amazing to see the development they’ve gone through over the years, having such a great artist roster, and releasing amazing music for so many years now.

Back in 2012 I went to my first Psychedelic party, being clean. It was Iboga’s 15 Year anniversary party in Copenhagen, with both on the lineup, together with Liquid Soul, Ace Ventura, Ticon, and I think Phaxe as well. I had an absolute blast and was awestruck over the whole atmosphere there.

As psy-trance is a relatively underground genre in electronic music, I always find it fascinating to find out what led a producer to creating this style of music. How did your journey into psytrance begin and how did it transpire from dancer to music producer to album releaser?

AUDIODACT: When I was around 15 years old, a good friend introduced me to Psychedelic Trance. This was the period when Chromosome, Astrix, 1200 Micrograms, and so on released (for me) pivotal albums which blew my mind having never heard anything like it.

Naturally, I went to raves and had a blast, being completely entranced by the music, in love with the atmosphere and in awe by the visuals. I was (literally) like a kid in a candy store. I’ve always played instruments, and enjoyed it as a hobby, but never composed anything- just playing all sorts of metal. When I was in rehab, I told myself: You must give this a go when you get home! I started out DJing at an old legendary Psytrance club “Tuben” in 2013.

At the same time, I started fiddling with Cubase, not getting anywhere until 2015 when I met Kevin (Phaxe), who very kindly invited me to his place and showed me how he built up his tracks. I went home, still not having a clue, to my friend, who “translated” it for me. And from then on, I was, producing music. 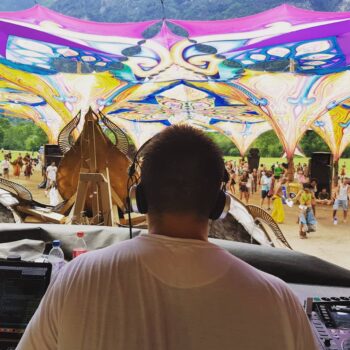 You’ve mentioned that your “favourite part of producing progressive psytrance is getting all the melodies to fit together, muting the bassline and just go with the flow.” Where many producers focus on basslines and huge drops, what is it about melody that does it for you?

AUDIODACT: Indeed. Melodies are the icing(s) on the cake for me. It’s what takes me to a different place. It’s what makes it that much more exciting to dive into. Basslines (for the most part) are static and a locked element in the track, whereas the melodies can interlink, evolve, they invite you further in trance. The bassline keeps you grounded, while the melodies can take your mind on a journey.

Producing music is how I cope with feelings. Positive and negative.”

A Quiet Happiness was initially intended to be an ambient track, embedded with a deep meaning. Could you explain what it takes to insert such visceral emotion into song? (Which in my opinion is what makes the best music).

AUDIODACT: That is a great question! Producing music is how I cope with feelings. Positive and negative. It’s sort of a meditation to me, where I in this situation, try to come to with the loss, and just let it all out. Those kinds of tracks are also the ‘easiest’ to make, even though it is personal. It helps me get through challenging times.

Each track on Reveries is new except for three. Transition & Life Becomes a Loop, which are revisited versions and Homebound, a remix of your 2018 release. Why did you choose these tracks to revisit/remix?

AUDIODACT: Transition was originally released as a single, and a first glance into my album in 2020. Life Becomes a Loop was released on Emok & Banel’s compilation ‘Entheogen’ last year. I knew both had to be on the album! Since then, my mixing skills have evolved quite a bit, thanks to my good friend Henrik (Metronome), so they are simply remixed.
Homebound was my first release on Iboga, back in 2018. It’s a special track to me. I always knew I wanted to get back to it, and it just felt fitting to return to it.

Let’s talk about Salvation. In modern day psytrance, a track that features a Triplet bassline throughout is few and far between. What attracted you to closing out the album this way? (As the final track of the album, I think it’s a great conclusion.)

AUDIODACT: Thank you! It’s the first (and not last) triplet bassline track I’ve made. I enjoyed working with it a lot! All the tracks are pretty much in the order of when I finished them. Salvation happened to be the last of the nine. And I found it fitting with something laid back, from the previous eight being a rollercoaster of emotions. 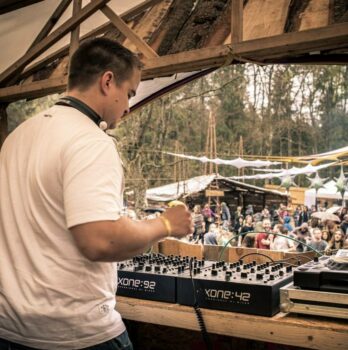 This album is 100% Audiodact- no collaborations. Is there A, a reason you preferred to work alone on this project and B, who would you love to collaborate with in the future?

AUDIODACT: Initially I’d have loved to have collabs and maybe remixes of one of my previous tracks on it. It just didn’t happen, and as time went on, I felt I had enough stories to tell and just went with it-
which is always a nice thought! I’m very influenced by the Progressive Trance from the mid 2000’s, from Scandinavia such as Andromeda, Robert Elster/Vibrasphere and Ticon. Metronome, Phaxe, Morten Granau, Lyktum and Liquid Soul would also be awesome to collab with.

Creating music is a very personal expression of one’s soul. What are you saying to the world with Reveries and what do you hope to invoke through your music?

AUDIODACT: In the dictionary ‘Reverie’ is ‘to daydream.’ Which I felt fitting, as I see my music as a tiny window of opportunity for people to escape daily life. A place for people to go, to feel embraced by melodies and ambiences. I hope people will create their own associations and stories with my tracks, as I have with the album.

Listen to the full album here: